Table football for the students of the Spanish course 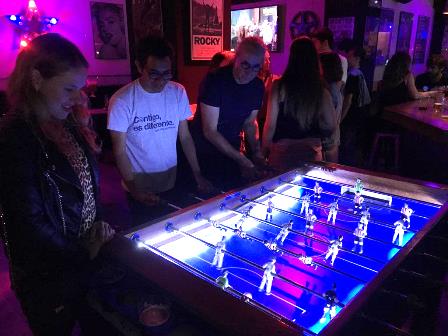 This emblematic game found in bars and recreation areas has been a part ofsome unforgettable evenings. Nevertheless, few people know some figures about this entertaining game. The first patent of table football was dated between 1880 and 1890.

Since those days and experiencing a boom in the 60s, table football has established itself as a very popular game in Spain. For some of our students it is a surprise to see the players with their feet apart. It is true that in Spain it is more traditional to find this type of doll although you can also find the typical shape of a shovel with which people are more accustomed.

On the other hand, it is usually played with 2 types of modalities. Ball stopped or in movement. Basically, in one of them, the ball can be stopped by the striker to be able to make a series of tactics before shooting at goal. On the other hand, with a stopped ball, players can only hit with the ball moving and not stop the ball under any circumstances.

Even though there are official regulations for table football, the people do not read these rules and do not know them. Therefore, when you play in a bar, we can find people that tell us their own rules that they know since they have learned to play and that they respect in their area. In between all those rules, there is one universal rule: wheeling is prohibited. This gesture of repeatedly spinning players in the hope of hitting the ball and hopefully, disguised as technique, can score a goal is not the most correct.

Other people also discuss serves or kicks. If they are always to be from the middle of the field or on the contrary, the goal that received the last goal must have the ball and serve from there. If the striker stops the goalkeeper's serve, he may or may not return it to the goalkeeper. If it is returned to the goalkeeper, he must choose a number of times that varies between 1 or 3 times.

As you can see, the game has some simple rules and a pretty straight forward end, even though you don’t always enjoy a game of table tennis if it is not of high quality. In some bars we can find tables a little more antiquated, where their strong character, tanned with signs of having passed so many finals among friends still shows a vitality in wanting to exercise their work, as those professionals who are about to retire give us the best yet.

The new models give us a field that is a smooth surface where the balls acquire incredible speeds. The controls slide as if they were an extension of your own hand and as if that were not enough the latest models include LEDs and a system to carry the score.

If you like this type of experience in the company of more people and in another country, Instituto Hemingway can help you get closer to Spanish. We have classes every Monday ensuring that your level corresponds to what we have. We are located in the city of Bilbao, capital of the province of Bizkaia. If you want to make a different trip to Spain and get to know other aspects of its culture and areas, we recommend you come to the Basque Country without a doubt! So, see you this September 25 at 18:00.