Students of Spanish courses in Bilbao went to see Flamenco! 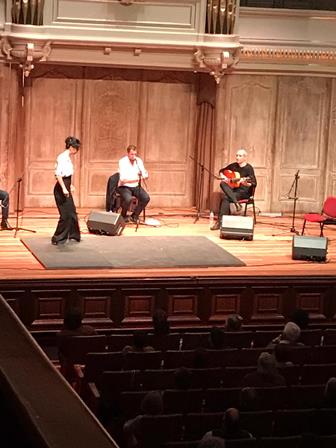 It is interesting to know that the owner that used the land to construct the Bilbao Philharmonic Society banned flamenco shows. Despite this restriction, on 21st November 2020 our students were able to watch a marvellous performance by Juanjo Navas in song, with strings by Curro Bermejo and rhythm brought by Lidia de Lorenzo, José Manuel Palacios Arroyo and Darío Campos.

At this musical evening we gathered to pay tribute to the Bilbao poet Blas de Otero. His verses were reinterpreted with a new flamenco essence. For some of our students it was the first time they attended an event like this.

It was very special for them to be able to see the emotion, the movements on the tablao and the energy from the kahon as it was played, joined with the rhythmic claps as palms came together.

The atmosphere in the theatre was very interesting since at first everyone was silent and reserved in character. But as time went by, and the pleasant feeling spread provoked by the music, people could be seen follow the rhythm in disguise with their feet or trying to follow to claps when they were easy.

When the audience witnessed a special moment such as a long sustained note or the imperious heel that made the wooden slats speak, you could hear applause, interjecting cheers of ‘olé’ and shouts of joy.

All this for these artists spurred them on and they constantly thanked each other with a gesture reminiscent of bullfighters greeting their audience before a fight. This cohesion of Spanish art that follows the same tone in certain gestures, prompts us to always pay attention to the details of different Hispanic activities.

These activities are always included in the Spanish courses that we offer at Instituto Hemingway. We start classes every Monday of the year ad at different levels.
Sign up!