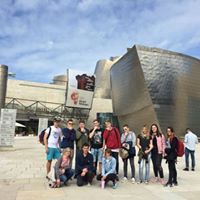 The Guggenheim Bilbao has been hosting an awe-inspiring exhibition of the works of Wassily Kandinsky from the 20th November 2020. Alongside renowned artists Olafur Eliasson, William Kentridge and Lee Krasner, Kandinsky’s abstract expressionism is a fantastic addition to the museum’s current display; different, but not out of place.

Kandinsky believed in the freedom of art, drawing inspiration from the needs of the artist and not from what the viewer demands. His colourful, liberal style and prolificacy is somewhat unexpected considering the first ten years of his adult life were spent studying and lecturing in law and economics.

Having grown up in Moscow, the artist first went to art school in Munich, Germany, where he stayed for around three decades and became a German citizen. When WWI came, he moved back to Russia for a time, where he became taken by Russian avant-garde art. After returning to Germany some years later, he was then forced to flee to Paris as the Nazi regime shut down the Bauhaus, and then confiscated 57 of his works in the name of purging ‘degenerative art’.

Paris is where he spent the rest of his life, and he died there. You can see the influences of French art reflected in his paintings as the natural sciences and Surrealism become of interest to him. The piece ‘Capricious Forms’, 1937, is a clear example of biomorphic surrealism.

Replacing the recent Lygia Clark exhibition, this collection, curated by Megan Fontanella, has strong links to the Museum, as Solomon R Guggenheim had been collecting Kandinsky’s pieces for years, and even met the man in 1930.

At Instituto Hemingway, all of our students are invited to come along to our free cultural events, including wine tastings, Pintxos nights and going to the Guggenheim museum! Keep an eye out for what’s coming up in December; we can’t wait to see you there. If you are not yet a student and are interested, please do get in touch!