The students of the Spanish courses in Bilbao celebrate the triumph of the lions! 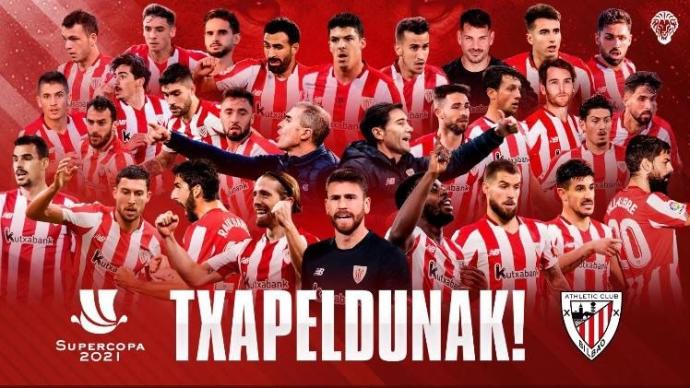 January 17th, 2021 will be marked for the rest of the history of the city because, despite the fact that 2020 has no left us a good taste in our mouths, we find that city's team, the Athletic Club, has won the Spanish Super Cup against FC Barcelona in a passionate match.

It was not until minute 40 of the first half when Barcelona with a score from Griezmann put the first goal on the scoreboard. However, instead of the morale declining, the lions after a minute of the first goal, tied the Catalans.

The scale was balanced and the end of the first part was already decided.

During the second half, in the 56th minute, the Bilbao team had scored another goal but the VAR ruled that it was out of play. 20 mintues later, Barcelona sentenced their second goal, ensuring for the moment a clear victory and the title.

Battles count until the last minute. The pressure and feelings play against them but this did not diminish the strength of the Bilbao team and therefore in the 89th minute they scored the goal of hope.

The extra time was not enough for the players and therefore they had to go into the extension. Tiredness was already raging but worse would be to be so close to victory and not get it.

In the 93rd minute, Williams gave the final thrust to that contest. Now they had to make sure to keep this result until the referee whistled the end.

27 minutes passed more than for one of the teams they were eternal and for the others scarce. However, fate decided to grant the Red-and-White members the long-awaited victory for their effort and work.

Instantly, the neighborhoods of the city of Bilbao began to fill with shouts of joy, firecrackers resounded throughout the city and social networks were flooded with congratulations to the brave warriors.

Some of our most soccer-loving students have also been celebrating the victory. Some pick on others and the teachers also told their students with great enthusiasm this football odyssey.

If you want to learn Spanish in Bilbao or are looking for face-to-face classes to learn Spanish, Instituto Hemingway is an ideal centre for you. With 22 years of experience and accredited by the Cervantes Institute, we are focusing on teaching Spanish to foreigners. If you want more information about our courses or our cultural outings, do not hesitate to contact us!