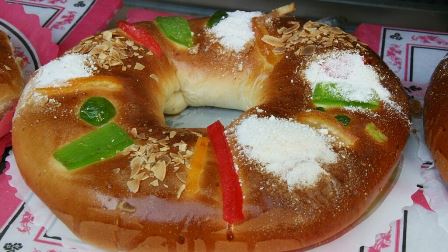 Three King´s Cake is eaten on the 6th of January to celebrate the Epiphany. It is a circular sweet bread decorated with candied fruit in order to resemble a crown. The cake is usually vanilla flavored with plain or chocolate cream as a filling. Many bakeries in Bilbao will be selling the three king´s cake around this time.

In Spain two things are hidden in the cake, something that represents the king and a black bean. Whoever finds the trinket in their slice of cake is to be treated like a monarch for the rest of the day and whoever finds the bean has to pay for the cake the following year. This is just one interpretation of the tradition but there are many more. For example some people put a baby figurine in the cake and whoever finds this will have good luck for the rest of the year.

The reason why there might be so many interpretations of the tradition is because the origin is unknown. Some say it originated from the Roman holiday Saturnalia, a holiday that honors the god of Saturn. Others say it originated in old world France and Spain during the middle ages, and when it was brought to the new world along with Catholicism and Christianity the tradition evolved.

At Instituto Hemingway, all of our students are invited to come along to our free cultural events, including wine tastings, Pintxos nights and going to the Guggenheim museum! Keep an eye out for what’s coming up in January; we can’t wait to see you there. If you are not yet a student and are interested, please do get in touch!

If you would like to try the Three King´s Cake but won´t get a chance to visit Spain here is a recipe!