A life-changing trip in the Basque Country 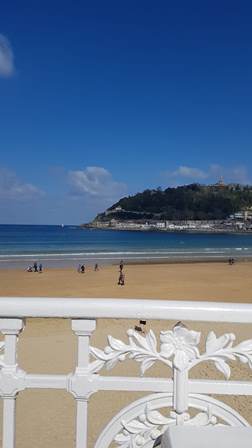 I was seventeen years old when I went on an unforgettable trip with my school to Bilbao and Donostia-San Sebastián, and my experiences from this trip sparked a love for the Basque country that has only continued to grow since.

Our first day was in Bilbao. It was a rather cloudy day, but no grey skies could take away from the splendour of the Basque architecture. The buildings were so full of character that I thought to myself ‘I have to live here someday!’

As we toured the city, we passed people playing a traditional Basque sport (known as jai alai), with huge long gloves in the shape of a hook, the likes of which I had never seen before. To this day, one of my life goals is to learn how to play this game! Basque culture is so vibrant and rich, the more I learned about it the more I found I was hooked (pun intended).

We visited museums exploring the country’s fascinating history. One thing that stuck out to me in particular was the Basque maritime tradition of coastal fishing in small oar-driven fishing boats (known as traineras in Spanish and Estropadak in Basque). Though these boats are no longer used for commercial fishing today, the tradition continues with the annual regattas held in San Sebastián. Ever since hearing about the regattas, I have always hoped that one day I could go and see one in person, alongside the huge crowds of supporters that show up to cheer on their team each year.

My friend and I stayed with a host family in Donostia-San Sebastián who were extremely welcoming and kind. I noticed that my confidence and ability in speaking Spanish improved greatly as we were speaking with them constantly and exclusively in Spanish. In the ten years I have studied Spanish, I have stayed with three host families and in each instance, I have noted a marked improvement in my abilities between the start and end of my stay. Being immersed in an environment where people are speaking colloquially and about everyday life beyond what we were being taught in lessons expanded my vocabulary range greatly. For example, our hosts in Donostia-San Sebastián were kind enough to teach us a popular Spanish card game called escoba (broom), which involves using traditional Spanish cards called naipes. They explained all of the rules in Spanish which challenged us to adapt and expand our knowledge of the language. Sadly, I didn’t manage to buy a set of naipes to take back to the UK in order to keep playing, but I hope someday I can relearn the rules of escoba.

Visiting Bilbao and San Sebastián with my school was the driving force behind my decision to pursue languages at university. I found I had fallen in love with the people, the architecture, and the culture of the Basque country, and I dreamt of spending the Spanish element of my year abroad there. Instituto Hemingway has made this dream a reality. I am now living and working in Bilbao, and have the opportunity to do all the things I have wanted to do ever since my first trip to this incredible city. I could not thank Instituto Hemingway enough for helping me make my wish of living in the Basque Country come true!